✵The article gives records of the herb Cassia Twig, its English name, Latin name, property and flavor, its botanical source 2 plant species, ①.Cinnamomum cassia Presl, and ②.Cinnamomum cassia BL.var.macrophyllum Chu.var.nov., with a detailed introduction to the botanical features of these two plants, the growth characteristics, and ecological environment of these two plants, the features of the herb Cassia Twig, its pharmacological actions, medicinal efficacy, and administration guide.

Brief introduction: The herb Ramulus Cinnamoni is the dried young stems of Cinnamomum cassia Presl., used (1).to induce sweating for releasing the muscles in cases of wind-cold affliction, (2).to warm and unblock the meridians to relieve various pains due to cold and congealing blood, and (3).to stimulate menstrual discharge for treating amenorrhea. The herb is commonly known as Ramulus Cinnamoni, Cassia Twig, Guì Zhī. 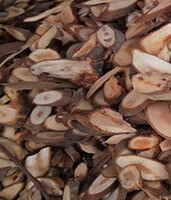 Botanical description: The Cinnamomum cassia is a kind of evergreen tree, it grows up to 12~17 meters high. The bark is gray-brown and fragrant, and the young branches are slightly quadrangular. Leaves are alternate, leathery; oblong to nearly lanceolate, 8~17 cm long, 3.5~6 cm wide, the apex is pointed, the base is obtuse, entire edge, the upper surface is green, shiny, the undersurface is grayish-green, pubescent; 3 veins emerge from the base, apparently elevated at the lower part, and the veinlets are horizontally parallel; the petiole is stout, 1~2 cm long. The panicle is axillary or subapical, 10~19 cm long, pubescent; flowers are small, ca. 3 cm in diameter; pedicle is about 5 mm long; perianth tube is about 2 mm long, 6 lobes, yellowish-green, elliptic, 3 mm long, densely pubescent inside and outside; 9 developing stamens are in 3 whorls, anthers are oblong, 4-locule, valves are cracked, the outside 2 whorls are without glands on filaments, anthers introverted, the stamens on the third whorl are extroverted, there are 2 glands at the base of filaments, there is still 1 round of staminodes, anthers are heart-shaped; pistils are slightly shorter than the stamens, the ovary is oval, 1-locule, 1 ovule, styles are thin, as long as ovary, stigma is slightly disc-shaped. The berry is elliptic or obovate, the apex is slightly truncate, dark purple, about 12~13 mm long, with persistent perianth outside. Seeds are long oval, and purple. Its flowering period is from May to July, fruiting from October to December, or till February to March of the next year.

Growth characteristics: The tree is suitable for tropical and south Asian tropical areas with high temperature and high humidity, not bear cold, it is vulnerable to freeze damage where the temperature is below 0 °C (Celsius, or 32 degrees Fahrenheit) in winter. It is distributed in southern coastal areas of China.

Characters of herbs: The herb is long and cylindrical, multi-branch, 30~75 cm long, and the wide end is 0.3~1 cm in diameter. The appearance is red-brown to brown, with branch marks, leaf marks, bud marks, punctiform lenticels on the surface, longitudinal ridge, fine wrinkles, and small shades. The texture is hard and brittle, easy to break. Slice thickness is 2~4 mm, the cortex of the cross-section is reddish-brown, the wood part is yellow-white to light yellow-brown, and the pith part is lightly in a square. There is a specific aroma, sweet taste, slightly pungent, and the taste of the cortex is thick. The herb of better grade is young, thin, symmetrical, red-brown, and has a strong aroma. 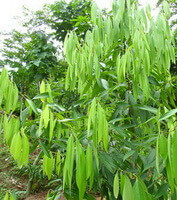 Botanical description: The Cinnamomum cassia BL.var.macrophyllum Chu.var.nov. is also known as Large Leaf Cassia, or Large Leaf Qinghua Cassia, it is a species of the Lauraceae family, and a varieties of the Cinnamomum cassia Presl., a kind of evergreen tree, 12~17 meters high, the whole plant has an aroma. Bark colored gray-brown, young branches slightly quadrangular; leaves are alternate, shiny, tender leaves are purple, dark green on the back of old leaves; panicle axillary or terminal, flowers are small, yellow-green; berry oval, green when it is not mature, turn black-purple when ripe. Its flowering period is from June to July, the fruiting period is from February to March of the next year.

Growth characteristics: It is cultivated in hilly or sloping mountains and has a large area of cultivation in the Zhujiang river area, and other places in China.

Characters of herbs: The herb is similar to the twig of Cinnamomum cassia Presl in character.